ATLANTA (AP) Matt Bryant kicked five field goals, including a 56-yarder, for all of Atlanta’s second-half points and the Falcons clinched a playoff spot by beating the Carolina Panthers 22-10 on Sunday.

Atlanta (10-6) clinched the No. 6 seed in the NFC and will play at the Los Angeles Rams next week in the first round of the playoffs.

On a day when Cam Newton and the Panthers’ offense struggled, Bryant’s 15 points provided a margin too great for Carolina to overcome.

The Panthers (11-5) had a playoff spot secured entering the weekend, but they couldn’t improve their position.

Minnesota’s 23-10 win over Chicago earlier Sunday ended the Panthers’ hopes of a first-round bye. The loss to the Falcons ended Carolina’s goal of winning the NFC South, and the Panthers will open the playoffs at New Orleans.

Matt Ryan completed 28 of 45 passes for 317 yards, including a 19-yard touchdown pass to Devonta Freeman on Atlanta’s opening drive, and no interceptions.

The Panthers pulled even on Newton’s 4-yard scoring pass to Devin Funchess late in the first half.

Newton threw three second-half interceptions. The third interception, by Robert Alford in the end zone with 8 seconds remaining, ended the Panthers’ final drive. Newton completed 14 of 34 passes for 180 yards and one touchdown.

With the game tied in the third quarter, the Falcons had an apparent touchdown taken off the board when a review showed Mohamed Sanu didn’t maintain control of a 12-yard catch in the end zone. The ball hit the ground after Sanu collided with Julio Jones, who also was crossing to the middle of the end zone.

The Falcons settled for Bryant’s first 30-yard field goal for a 10-7 lead.

Newton led the Panthers on a 16-play touchdown drive that consumed more than half of the second quarter and tied the game at 7. Newton gained the needed yard on a fourth-down keeper, but the true back-breaking play for Atlanta’s defense was his 27-yard pass to Brenton Bersin on a third-and-23 play. The pass set up Newton’s 4-yard scoring pass to Funchess.

Newton was 0 for 9 before finally completing his final seven passes of the first half. Newton completed his first pass to McCaffrey – for a loss of 3 yards – midway through the second quarter.

Jones caught a 14-yard pass midway through the third quarter to reach 9,000 career yards faster than any receiver since the 1970 merger.

The two-time All-Pro and five-time Pro Bowl selection last month set the league mark with the most catches and yards receiving in a receiver’s first 90 games.

Jones finished with five catches for 80 yards. He survived an injury scare after he took a big hit from Carolina strong safety Mike Adams on the opening drive. He returned to the field on the same drive, which ended with Ryan’s touchdown pass to Freeman.

Running back Jonathan Stewart was due to back tightness. The Panthers also were without two more starters: safety Kurt Coleman (ankle), and right guard Trai Turner (concussion).

Panthers: Carolina will play at New Orleans next week in the first round of the NFC playoffs.

Falcons: Atlanta will visit the Rams next week in the first round of the playoffs.

Cam Newton threw for 137 yards and a touchdown and ran for 75 yards as the Panthers (9-4) racked up 216 yards on the ground against the league’s No. 2 ranked defense to pull even with the Saints atop the NFC South standings.

After the Panthers squandered an 11-point fourth quarter lead, Newton broke free of the pocket and raced 62 yards for a key first down with 2 minutes remaining. Stewart scored his career-high third TD when he jumped over the line of scrimmage, reaching the ball across the goal line for a 31-24 lead.

Minnesota couldn’t manage a first down on its final drive and turned the ball over on downs.

The Panthers seemed in control midway through the fourth quarter leading 24-13 after Newton made an off-balance throw to Devin Funchess for an 18-yard touchdown, and Mario Addison‘s strip-sack set up Graham Gano‘s field goal.

But the Vikings came charging back to tie it as Keenum hooked up on a 52-yard scoring strike on a crossing route. Blake Bell added 2-point conversion catch to cut the lead to three.

On Carolina’s next possession, Vikings safety Andrew Sendejo intercepted Newton on a ball that sailed off the hands of Christian McCaffrey and returned it to the Carolina 6. But Carolina’s defense had a huge stop, holding the Vikings to a field goal leaving the game tied with 3:07 left.

Vikings: Linebacker Emmanuel Lamur left game with a foot injury and did not return.

Vikings: Host the Bengals next Sunday.

Panthers: Host the Packers next Sunday.

Welcome to NBC Sports’ live blog of Super Bowl 50! Settle in with us for the next few hours and enjoy the biggest event in professional sports.

And that’s a wrap! Congrats to Peyton Manning and the Denver Broncos. Hope you enjoyed following Super Bowl 50 along with me. And remember #PuppyMonkeyBaby

Have a #SB50, @Millerlite40! pic.twitter.com/Vs2unzVDAb

But according to Peyton, Miller is going to be footing the bill at the bar tonight. That’s going to be a lot of Budweisers.

"This one's for Pat!" pic.twitter.com/3GLJi8GNwa

Peyton Manning will finish his career with 3 TD passes in 4 Super Bowls.

10:30 P.M. EST: Time to celebrate and drink some Budweisers

"I'm gonna drink a lot of Budweiser..and thank the man upstairs."
Peyton Manning is a Legend.

Even though Peyton Manning accounted for just 141 yards of offense, the Broncos defense made Cam Newton look mortal for the first time this season. Manning now gets the chance to go out on top, even if Eli isn’t happy about it:

So much brotherly love https://t.co/SjHEjMQM1V

Cam's reaction on the sideline after the last #Broncos touchdown…#SB50 https://t.co/8XQ1PkbrN7

Where is Riverboat Ron?????

Get the orange and blue confetti ready.

That’s two and a half sacks for Miller with two forced fumbles. Can you say #SB50 #MVP?

9:58 P.M. EST: Panthers get the ball back with less than five minutes left

Alright Mr. MVP. It’s time to see what you’re made of.

Is this the end of #BeastMode?

First it was Steve Harvey spot and then came the Drake ad. Well done.

No team has ever won the Super Bowl without scoring an offensive TD.
(Via @wgsmit3 @nflnetwork)

Peyton Manning better buy everyone on the Denver defense a new Acura NSX.

Ealy is having an monster game. Interception, three sacks, a forced fumble. He should win the MVP if Carolina makes a comeback.

Imagine these two in a 40-yard dash competition at the combine.

At the end of the third quarter, the @Broncos still lead the @Panthers
in #SB50 pic.twitter.com/emtHIbTV2u

Congrats if you took the “Will Ted Ginn Jr. drop a pass” prop bet.

Just throw it up and deep Cam, Philly Brown's got it. #SB50 #KeepPounding https://t.co/qMLwmI88Qz

Yet another example of Cam’s receivers stepping up.

The ball drifted and smacked the right upright.

But why didn’t she wear a white glove?

The ninth overall pick in the 2007 NFL Draft (yes, this really happened) turns on the jets for a 45-yard catch to quickly move the Panthers into Broncos territory.

Carolina gets the ball to open up the second half. Cam Newton was 8-19 for 95 yards in the first half. Safe to say he needs to be much better in the air during the final 30 if the Panthers are going to make a comeback.

Beyonce almost fell backwards and SAVED IT
*IN HEELS*
AND made it look good
Super Bowl MVPhttps://t.co/2cwbGKvmBNhttps://t.co/aqk5mIG9jp

And it was awesome! Here’s some photos and a tweet from PST’s Joe-Prince Wright. Hi JPW! 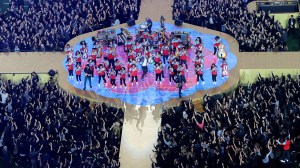 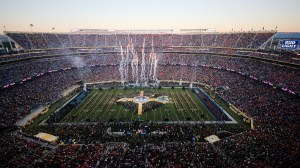 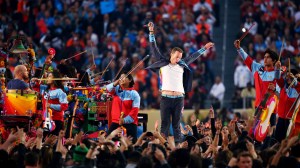 But don’t tell Peyton that Bruno is performing.

Let’s see what ya got Chris Martin.

8:20 P.M EST: DeMarcus Ware closes out first half with sack on Cam

Broncos’ sack count is up to four with an entire half of football left.

If #SB50’s football field were a cosmic timeline, then cavemen to present day spans a turf-blade's thickness in the end-zone.

Cam Newton evades pressure and slings it to Devin Funchess for the leaping grab pic.twitter.com/OgkM3vyv5T

Peyton’s first INT in 164 postseason passes comes at an inopportune time as the Broncos were cruising down the field.

Kony Ealy is 6'4'', 275 lbs and WILL intercept your pass, even if your name is Peyton Manning. #SB50 #KeepPounding https://t.co/zKpeR8FTva

The Panthers second turnover shockingly came with under seven minutes to go in the second quarter as Stewart ripped the ball away from Tolbert. The Broncos safety absorbed quite a hit on the play.

It would have knocked me out until Super Bowl 51.

Steve Harvey’s T-Mobile ad IMO is the leader in the clubhouse with a few hours left to go.

7:45 P.M. EST: Demaryius Thomas was shaken up after this hit by Luke Kuechly

Another reason why Kuechly needs to become the next office linebacker.

C’mon Jonathan, you score a touchdown in the Super Bowl and this is how you celebrate!?

7:30 P.M. EST: Talib would be tossed if Goodell’s new rule was instituted

Roger Goodell openly talked about a new rule in which a player would be ejected if he received two personal foul penalties. Well Aqib Talib has already racked up two and it’s not even halftime yet.

They’re not the only ones who are ready for a break from football:

To the men who think their girl is cool cause she watches the Super Bowl.. We are all just waiting for Beyoncé.

I love it! Never out of it! We just gotta wake up a little bit. #KeepPounding

Panthers’ WR Jerricho Cotchery make a juggling catch on the field that was initially ruled incomplete. After a lengthy review, referee Clete Blakeman announced that the call on the field stands.

6:54 P.M. EST: In a rare sight, the Panthers go three-and-out on their first drive

Carolina correctly selected tails, but deferred to the second half, which means Peyton will get the ball first.

Lady Gaga’s rendition of “The Star-Spangled Banner.” was incredible:

But it caused a bit of controversy.

BREAKING: Bad news for those who had the over on Gaga's National Anthem. Bet ends on the "first brave," which came around 2 minutes.

6:20 P.M. EST: Curry gets the Panthers faithful ready for kickoff

Steph Curry isn’t the only NBA superstar who is taking in the sights and sounds of Super Bowl 50.

Looks like Cam might be receiving a FedEx envelope with a letter from the NFL regarding his new gear.

Cam seen wearing gold cleats in warm-ups. If worn during #SB50, I've heard that the fine would be around $5K. Should he wear them? @WDBJ7

The Obamas will sit back and watch Super Bowl 50 with pizza and wings. Obama says there will also be a vegetable tray “that nobody touches.”

Michelle Obama says the football game’s serious watchers go to the Treaty Room of the White House. She also says there’s a champagne room “where you really don’t know what’s going on, but you’re close to the champagne.”

The weather is perfect at the Field of Jeans as the Denver Broncos and Carolina Panthers prepare for the “Big Game.”